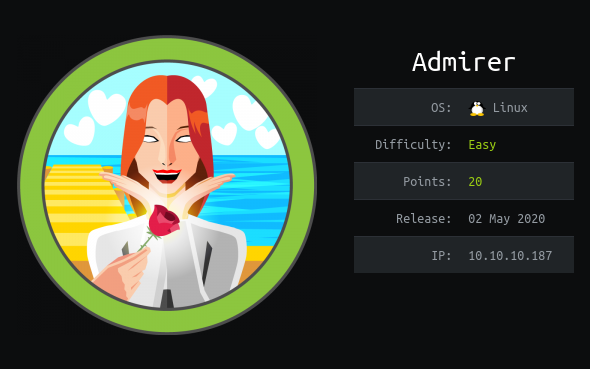 Nmap results and Gobuster reveals robot.txt file which is dissallowing a dir called admin-dir running wfuzz against it we got two files contacts.txt and credentials.txt which contains ftp user and pass.Got some files in ftp server.We got an another directory utility-scripts and fuzzing the dir we got another file adminer.php which is running the adminer-database on it.Connecting our mysql database with the adminer we can write adminer-db data to our data and so we got a password for user waldo.And the user waldo can run a script as root.Privilege escalation via python library path hijacking and running script as root we got a root shell by using netcat bind shell.

I tried to check any anonymous login for the ftp but nah ! thats was just a guess

In our nmap scan we got a disallow entry for the dir admin-dir from the robots.txt and we can confirm the file via gobuster too.

and there are two more dirs images and assets which have a response 403.

and here is /robots.txt

There is an entry for disallowing a a dir admin-dir

Lets fuzz on it using wfuzz.I used the dictionary Seclists-big.txt

Got two txt files contacts.txt and credentials.txt. lets enumerate on these.

We got three usernames and their passwords main are ftp ones.

Lets try to login to ftp using these credentials.

I got two files from there dump.sql and html.tar.gz i downloaded both of them to my machine.

and now here is dump.sql

And i decompressed the html.tar.gz file as well

and i got the file to be extracted

So there are some files in the dir utility-scripts

We cant access the dir called utility-scripts as response is 403:forbidden

But we can access three files from the utility-scripts

And as expected that phptest.php will print that text

We got a file adminer.php and that is running with adminer-database manager

But when i just google about the adminer-database manager , i got so many blogs about its vulnerability.

These are the main that i refered….

I am using maraia-db so all config files will be its.Here are some blogs i used to configure my maria-db are here.

Now its time for configuration.

I just logged in to my mysql as root .

and then create a user demo and give it proper permission to access the database.

and Save it by

and now i selected the db admirer and give the user appropirate permission for the database.

And now it done for the database side , now we need to allow the remote access.

the file for this configuration is /etc/mysql/mariadb.conf.d/50-server.cnf

Now just restart the service mysql once and you are good to go.

and i am in

and now in the blog

There is video at last that explains everything that what to write and where to write.

now we need to run sql-command in the sql command section.

and just write to get that local.xml file

Run the above query to write data in the table test.

but that local.xml doesnt exist….lets try with the index.php of the dir utility-scripts that was forbidden for us….

And finally we run the query successfully. 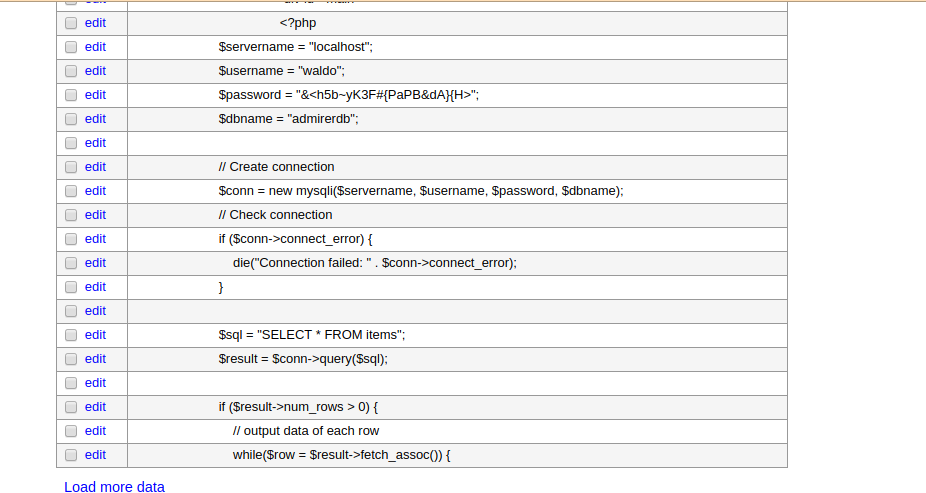 And i got waldo user password. and i can login with ssh now finally with the creds.

and it can set PATH as root .

It has the same interface that we have on admin-tasks.php but extended one.

Which is running a file called backup.py whci is in the same dir as scripts

Its using the module shutil and there is a function call of function make_archive.

The blogs that helped me

Well we know that we can set path as root so we can also set PYTHONPATH as root. since we can run the script admin_tasks.sh as root and also the bash script is running the backup.py so it will run as root itself.And we will create a python file containing netcat bind shell and we will set the PYTHONPATH to the dir where our custom shutil.py is located.And then run the script with the option 6 which will run the backup.py and backup.py will find the file shutil.py in its PATH.

Now Since we changed the PYTHONPATH to /home/waldo/newpath and It will execute our custom shutil.py that contains reverse-shell.And we will get a shell as root

It is our current PYTHONPATH

i created a new-dir called newpath

And in newpath i just made a new file called shutil.py .

And if we run

Now on our machine

and after a moment we got a reverse shell as root.

Got shell as root

Now its better to spawn a tty shell.