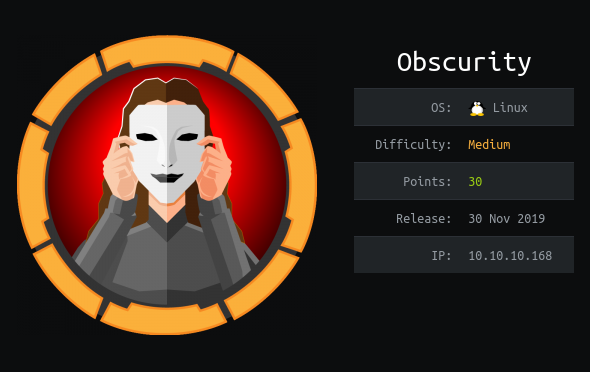 The real Journey of obscurity Starts with a wfuzz on the http port 8080 by the file SupersecureServer.py.And got the exact file,Reading the file and analyzing the python code we will get a www-data shell.There are bunch of files in the dir /home/robert/ and using the SuperSecureCrypt.py decrypt the key for the file out.txt and using the key decrypting the passwordreminder.txt and we got one more key that is credentials for user robert.There are Three methods to get root one is intended and another one is unintened , Both are related to that BetterSSH.py In unintended way we just remove/rename the BetterSSH dir and then make your own custom dir and place a file called BetterSSH.py containg code to spawn a bash shell and run the script.The intended way is to executing the original python script as root which is copying the shadow file and after getting hash of user root , crack it with john and we have root user pass.And there is one more intended maethod if your authenticate yourself while running the Python-Script and then you can run commands as root.

Running gobuster doesnt show me anything

If we look at the bottom of the webpage there is a mention of SupersecureServer.py

But if we look at dir development , it doesnt even exist.

Lets use wfuzz to find that hidden dir.

Since the initial page mentioned that the current web-server is running on the above script so we need to figure out a way from the file to get something.

If we look at the function serveDoc there is a line

Making a script to get a shell

Getting shell as www-data

If i run the script 0xprashant.py

And on our netcat listener we got shell as www-data

There is one valid user in /home dir, and its robert and Fortunatly we have read permissions to the dir

So we can read the content of the dir robert……

There are couple of files one is SuperSecureCrypt.py . The script is following

The box name should be Python To be honest lol XD, I mean here is Python Everywhere.

And i transfered all the four files to my machine , Since netcat is already installed we can use it to transfer files.

And on my machine

Like This i got all the four files to my machine.

And we can supply many things …like infile , Outfile, and a key ,

From the check.txt I figured it out that out.txt is the output after encrypting the file check.txt, The content of check.txt will be the key and the infile will be out.txt

So we can use the decrypt function to get out.txt decrypted.

And we got the string to be decrypted. SecThruObsFTW

Now If we run sudo -l we can see that we can run the script BetterSSH.py as root……

Its a simple script that Ask the user to Authenticate the user and if the user is Authenticated we can run commands as root. since the two lines saying everything

Lets get started our first method

Run the script as root

Now we are Authed! Now..we can run any commands by -u root command

if we read the content of the file BetterSSH.py we can see that its reading the /etc/shadow file and putting it in a random file generated. in the dir /tmp/SSH/

So what we gonna do

Output on our Loop

If you look at the dir /home/robert/BetterSSH we have the permission to rename the dir name, So its easy to rename it to any other name and make your own Dir called BetterSSH and then make a file inside it called BetterSSH.py since the user robert can run the script as root , it will run our custom script that contains the code to spawn bash.And running the script we are root

And now just use the following simple code to spawn a bash shell.

I got the root flag first becasue i was able to pwn root wihout getting ash user credentials Introduction@cache:~$ Column Details Name Cache ...